This rule is from the annex to the Infinity N4 ruleset, containing a series of rules, special skills, weapons and pieces of equipment which have been adapted to the N4 system, but with a provisional nature. Rules included here are completely official, however they may be modified in further expansions of the N4 ruleset.

During their Active Turn, as the Yu Jing player wants that two Zhanshi of their Fireteam to reach an elevated position, declares Climb as the Fireteam Order. Both Zhanshi climb, while the rest of the Fireteam members, even though activated by the same Movement Skill, don't do anything, and will instead perform an Idle.

During the Active Turn, a Fireteam of five Zhanshi declares the first Short Skill of their Order: Move. The Team Leader is a Hacker, so he declares Hacking as second Short Skill of the Order. This is a Movement + Support Skills combination. In this case, the Team Leader has not declared a BS Attack, so the rest of the Fireteam members cannot provide any bonus. Moreover, the other Zhanshi are not Hackers, so they will instead perform an Idle, and the Team Leader is the only one who acts. But, even if there were another Hacker in the Fireteam, this Trooper would not act either, and the Team Leader would not receive any support.

With the next Order, the first Short Skill is declared: Move. After checking Coherency, and the adversary's ARO declarations, the player declares the Second Short Skill of the Order: BS Attack. Once again, this is a Move + Support Skills combination. The Team Leader and the members of the Team move, but the Team Leader is the only one who performs the BS Attack. As this is a Fireteam of five models, the Team Leader gets a +1 B MOD, and a +3 BS MOD.

If the Discover Skill was declared instead of BS Attack as the second Skill of the Order, the Team Leader would have been the only one to perform the WIP roll, receiving a +3 WIP MOD.

In the Active Turn, a Fireteam of five Zhanshi declares the first Short Skill of their Order: Move. After the corresponding ARO declarations, the player has to decide what will be the second Short Skill of the Order.

Let's suppose the Fireteam are two Dāturazi, and one of them declares a BS Attack ARO against the Team Leader with a Chain Rifle, while the other Dāturazi declares a BS Attack ARO with a Combi Rifle against another Zhanshi. In this case, the Team Leader will perform a Normal PH Roll, while the other Zhanshi will have to perform a Face to Face Roll of PH againstBS.

In the situation shown in the graphic, during the Active Turn, the Zhanshi Fireteam declares Move as the first Short Skill of the Order. The opponent declares BS Attack AROs with their two Fusiliers, with the Fireteam only providing one ARO to each of them.

Now, the player must decide if their Team Leader declares BS Attack (Support) to face the Fusilier on the left, which would allow the other Fusilier to perform a BS Attack with a Normal Roll against one of their Zhanshi. Alternatively, he can declare Dodge (Evasion), so all Fireteam members could Dodge, performing two Face to Face Rolls (one for the Team Leader and one for the threatened Zhanshi) against the BS Attacks of the Fusiliers. 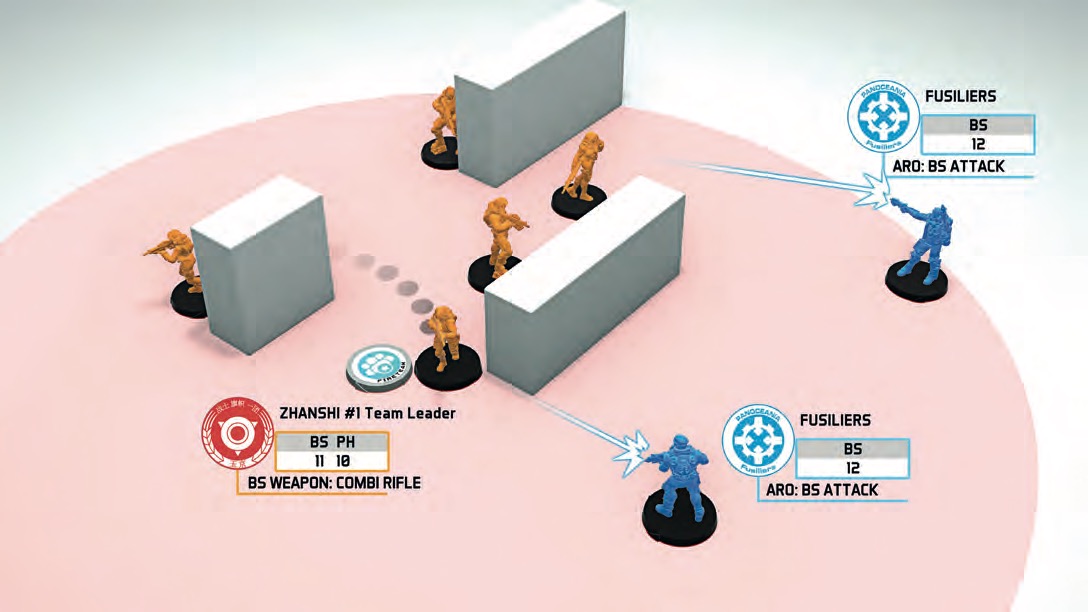 In the Active Turn, a Dāturazi armed with a Chain Rifle spends his Order and declares a BS Attack against the Fireteam of five Zhanshi. The Yu Jing player determines that the Large Teardrop Template of the Chain Rifle will only affect three of their Zhanshi (numbers 1, 2, and 3). If the Yu Jing player declares BS Attack as an ARO, those Zhanshi will need to perform a Saving Roll, so they decide to not risk them and declares Dodge as the ARO for those three Zhanshi, and also for Zhanshi #4. This Trooper, who is not affected by the Template, will use the Dodge Skill to move into Partial Cover. Zhanshi #5 doesn't declare an ARO as he already is in Partial Cover (see graphic). 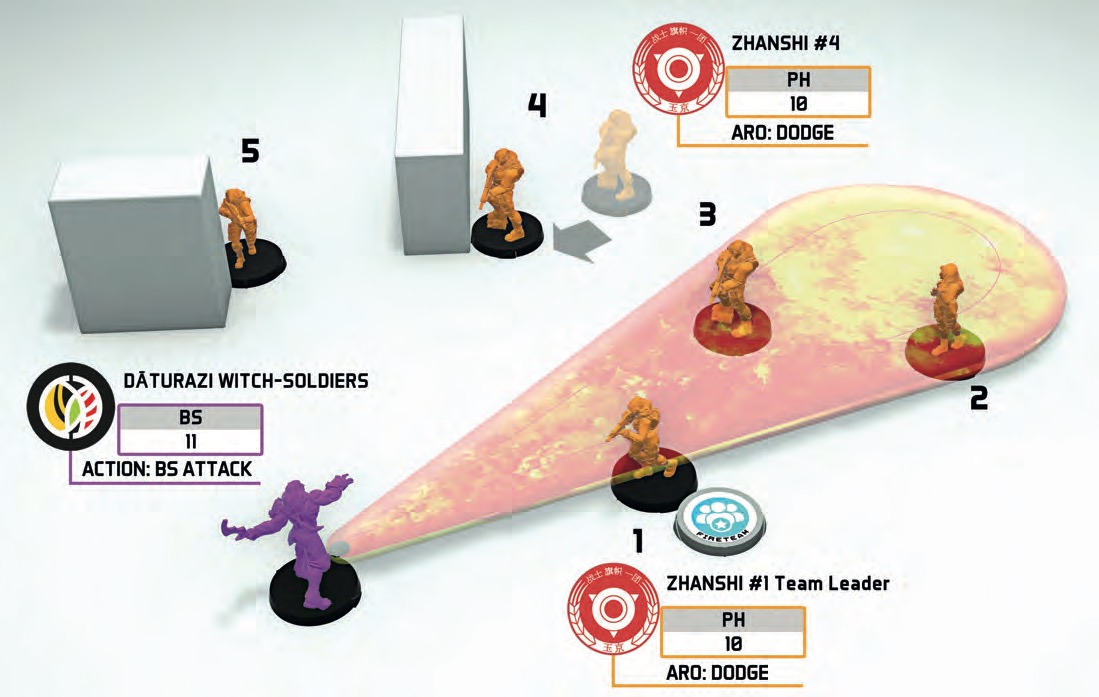 During the Active Turn, an Arjuna and his Kiranbot declare Move as the first Short Skill of the Order, and are in LoF of the Fireteam of five Zhanshi. The five Zhanshi declare the same ARO, BS Attack, but three of them target the Arjuna and the other two the Kiranbot. Thanks to the Peripheral (Synchronized) Special Skill, the Arjuna and the Kiranbot can choose different targets. The Arjuna declares the second Short Skill of the Order: BS Attack against Zhanshi #1, and the Kiranbot declares BS Attack as well, but against Zhanshi #2. As the Zhanshi belong to a five member Fireteam, they can all apply the corresponding bonuses.

Face to Face Rolls are performed between the Arjuna and Zhanshi #1, who has a bonus MOD of +3 to his BS Attribute and also +1 to the Burst of his weapon in ARO, so he will shoot twice. As the Kiranbot attacks with a Direct Template Weapon, Zhanshi #2 performs two Normal Rolls with BS, thanks to the bonus of +1 to the Burst of his weapon in ARO. Zhanshi #2 also gains a MOD of +3 to his BS, but he will have to make a Saving Roll for being hit by the Direct Template weapon. The other Zhanshi, who perform Normal Rolls as they are not being attacked, will also apply the bonuses to their BS Attack AROs (see graphic). 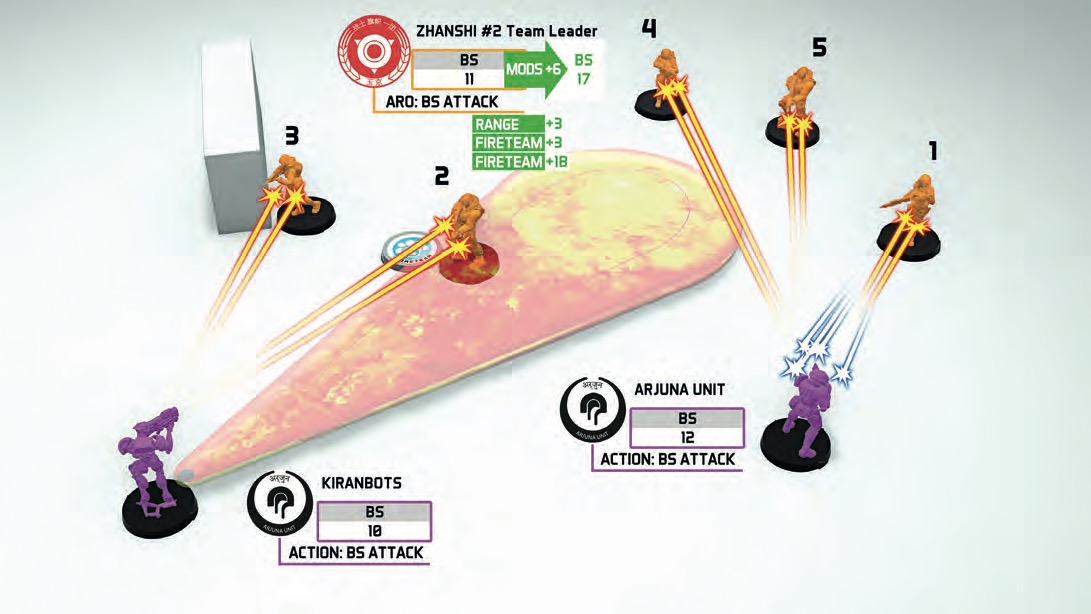 During their Active Turn, a Fireteam of three Zhanshi declares a Move + CC Attack Order against Miyamoto Mushashi, who has the Martial Arts L5 Special Skill. Only the Zhanshi designated as Team Leader will be able to perform the CC Attack, receiving a +1 MOD to B for each additional allied Trooper engaged in CC. Miyamoto's Martial Arts L5 gives him B2 and he decides to target the Zhanshi designated as Team Leader, resulting in a Face to Face Roll between the Zhanshi's B3 and Miyamoto's B2.

In the Active Turn, a Fusilier armed with a Missile Launcher declares a BS Attack against an Zhanshi from the Fireteam of five Zhanshi. However, this Attack is performed in LoF of the Team Leader and three other members of that Fireteam. The Team Leader and these three Zhanshi declare BS Attack AROs (applying the support bonuses). But the targeted Zhanshi declares Dodge, so he is automatically out of the Fireteam, because his ARO is different from the Fireteam's ARO declared by the rest of the Fireteam members. Therefore, the Yu Jing player only can use the Support bonuses of a four member Fireteam.

In the previous situation, if the Team Leader declared an ARO different from the Fireteam's ARO, the one declared by the other three Fireteam members, then he would automatically leave the Fireteam, and the Fireteam would be cancelled at the end of that Order.

Example of Order Spending and ARO Procedures (Fireteam in the Active Turn):

During their Active Turn, the Yu Jing player spends one Order on their Zhanshi Fireteam to declare Move + Move, as they are outside enemy LoF. With only one Order he activates the five Zhanshi and all of them declare the same Order, performing the same two Short Movement Skills.

With their next Order, the Yu Jing player changes the Fireteam's leadership, placing the Team Leader Token beside Zhanshi #1, who is armed with a HMG. In the same Order, as two members of a Fireteam of five Zhanshi are on a broken skyway, so they need to declare the Entire Order Jump in order to keep moving. Their player declares Jump as the Fireteam Order and performs aCoherency Check, confirming all Zhanshi are in Coherency. The two Zhanshi on the skyway will perform the Jump, but the rest will not need to Jump and will instead perform an Idle. At the end of the Order, the player performs anotherCoherency Check.

During their Active Turn, two members of a Fireteam of five Zhanshi are on a broken skyway, so they need to declare the Entire Order Jump in order to keep moving. Their player declares Jump as the Fireteam Order. The two Zhanshi on the skyway will perform the Jump, but the rest will not need to Jump and will instead perform an Idle.

With a new Order, the Zhanshi Team Leader declares Move, but now the PanOceanian player can declare an ARO as two members from their Fireteam of Fusiliers have LoF to the Zhanshi. Both Fusiliers declare a BS Attack ARO, but each of them can only choose one of the Zhanshi as a target. Fusilier #1 chooses Zhanshi #1 (the Team Leader, armed with a HMG) and Fusilier #2 chooses Zhanshi #2 (Combi Rifle). Both Fusiliers are armed with a Combi Rifle. Since they are part of a five member Fireteam, they get all the bonuses of a five member Fireteam in ARO. In this situation they can use the +3 BS MOD and the +1 B MOD.

The Yu Jing player now has to choose between Support or Evasion. If he declares Evasion, and wins the Face to Face Rolls, he could avoid the BS Attacks against both Troopers, but this will not remove the threat. If he uses Support and declares a BS Attack, he will apply the bonuses to the Team Leader, but Fusilier #2 will perform two Normal Rolls against Zhanshi #2, who can declare neither a BS Attack nor a Dodge as he will be providing Support to their Team Leader.

Finally, the Yu Jing player decides to risk it and declares a BS Attack, applying the Support bonuses for a five member Fireteam (+3 BS MOD and +1 B MOD). The player decides to split the Team Leader's Burst 5 (the HMG's B 4 and the Support bonus +1 B MOD) between both Fusiliers, with three Face to Face BS Attacks against Fusilier #1 and two Normal Roll BS Attacks against Fusilier #2.

Fusilier #2, thanks to the Support bonuses, can shoot in ARO with Burst 2 (Combi Rifle in ARO: B 1 and the Support bonus +1 B MOD) and with better accuracy (Support bonus +3 BS MOD). He succeeds in his two Normal Rolls against Zhanshi #2, who fails one of the Saving Rolls and enters Unconscious State.

The Yu Jing player has lost one of their Zhanshi, so he can now only use the bonuses of a four member Fireteam. With a new Order, he places the Team Leader Token beside Zhanshi #3, armed with a Combi Rifle and a Grenade Launcher. In the same Order, he declaresMove as the first Short Skill of the Order, but he only moves the new Team Leader, who gains LoF to Fusilier #2.

The PanOceanian player, guessing he is going to be attacked with the Grenade Launcher (which, thanks to the Support bonuses has B 2) decides to declare Dodge. The Fireteam of Fusiliers now has only four members, so it can only apply the corresponding bonuses. The PanOceanian player declares Dodge, and thanks to the Support bonuses, the Fireteam members get the Sixth Sense Special Skill, so they will not apply the negative MOD for Dodging a Template Weapon without LoF to the attacker.

Zhanshi #3 declares a BS Attack against Fusilier #2. He does not receive the +3 BS MOD, as he now belongs to a four member Fireteam, but he still has the +1 B MOD, so his Grenade Launcher has B 2. The player places the Circular Template over Fusilier #2 and checks whether this also affects Fusiliers #4 and #5. Now it is time to make the corresponding rolls to see how the situation is resolved...