Setting up the Gaming Table

From Infinity
Main Sections > Setting up the Gaming Table
Jump to: navigation, search

The advice given in this section is for information only. Although advisable, it is not mandatory to follow this guide to set up a gaming table.

Infinity CodeOne is a game that possesses a great amount of realism and flexibility, faithfully depicting tactics and maneuvers in a modern combat setting. As in a real combat scenario, in Infinity the terrain, the combat environment, has a special relevance determining both the strategy and the tactical options available to the players.

Due to the importance of this step, it is advisable that both players participate in the process of setting up the gaming table, alternating between one another to place the terrain elements, or simply placing them by mutual agreement.

The terrain pieces, Scenery Items and Buildings, configure the gaming environment where the troops will move during the game.

The main goal of terrain on the gaming table is to provide Cover that allows troops to move and maneuver without immediately falling under enemy fire. Using cover to round and flank the enemy is vital to ensure victory!

The layout of the terrain must force troops to maneuver across the gaming table to try to obtain a tactical advantage over the enemy. When deploying terrain, it is advisable that both players find a point of balance by placing enough Cover to allow the troops to maneuver, but without canceling the usefulness of long-range weaponry.

In Infinity CodeOne, it is advisable to adjust the size of the game table to the number of points the players are going to be playing. We suggest the following:

The Battle Packs are 2-player introductory sets containing all the necessary scenery items to start playing introductory games on a 24" x 32" game table.

Nevertheless, a balanced gaming table is based not only on the quantity of terrain used, but also on its layout.

When placing terrain on the gaming table, it is advisable that the big terrain pieces be placed so that the gaps between them are less than 10 inches, trying to trace a broken line in the middle of the table using three big blocks of terrain. This way the safe zones alternate with Lines of Fire suitable for snipers.

It is very useful for the big terrain pieces to have parapets, windows, porches, and other elements that allow the troops to cover while advancing through them.

When placing terrain on the gaming table it is important to make sure that the troops of both players can deploy without being completely exposed to the opponent's Lines of Fire from the beginning of the game.

Big terrain pieces can represent buildings or structures with their respective rooftops and elevations. If these rooftops do not have a way to access them (through stairs or elevators, for example), it will be hard for the troops to climb up or down them, limiting the tactical options of both players. Hence it is advisable that the majority of the terrain pieces have elevated zones that are accessible from the ground.

It is also advisable to avoid placing the terrain in such a way that too many bottlenecks and blind alleys are created. The more options the table offers for advancing towards the enemy, the more interesting the tactical choices will be.

It is advisable to deploy terrain in such a way that one of the Deployment Zones provides more Cover and/or has higher terrain pieces, giving a tactical advantage to the player who chooses to deploy on that side. 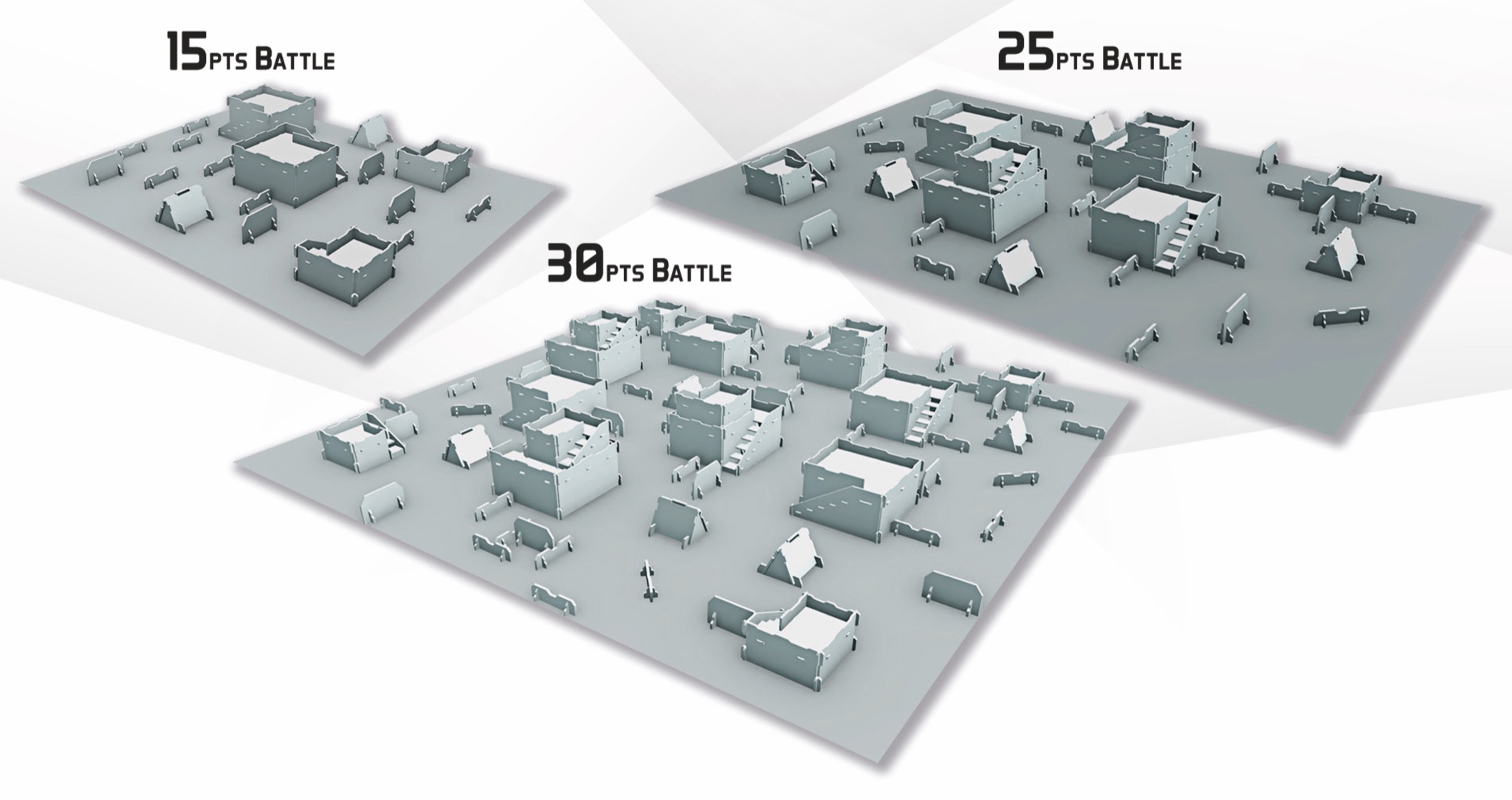