Interacting with a Close Combat

Any Trooper in Silhouette contact with an Allied Model that is in the Engaged State may only declare CC Attack, Dodge or other related Skills that may be used in CC. For example, in these circumstances declaring Skills such as Doctor or Engineer on a Trooper in Engaged State is not allowed.

Close Combat is often associated with a Movement, the most common game sequence in this case is the following:

The Active Player (Orange) consumes an Order and declares Move. 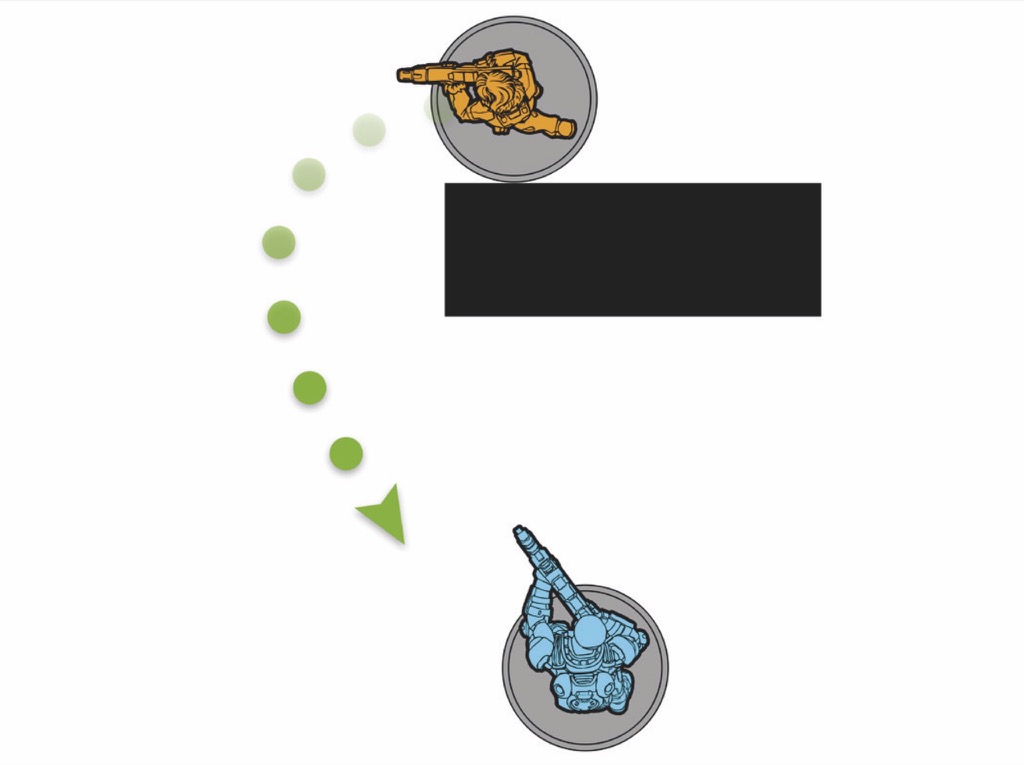 The Reactive Player (Blue) declares CC Attack as their ARO. 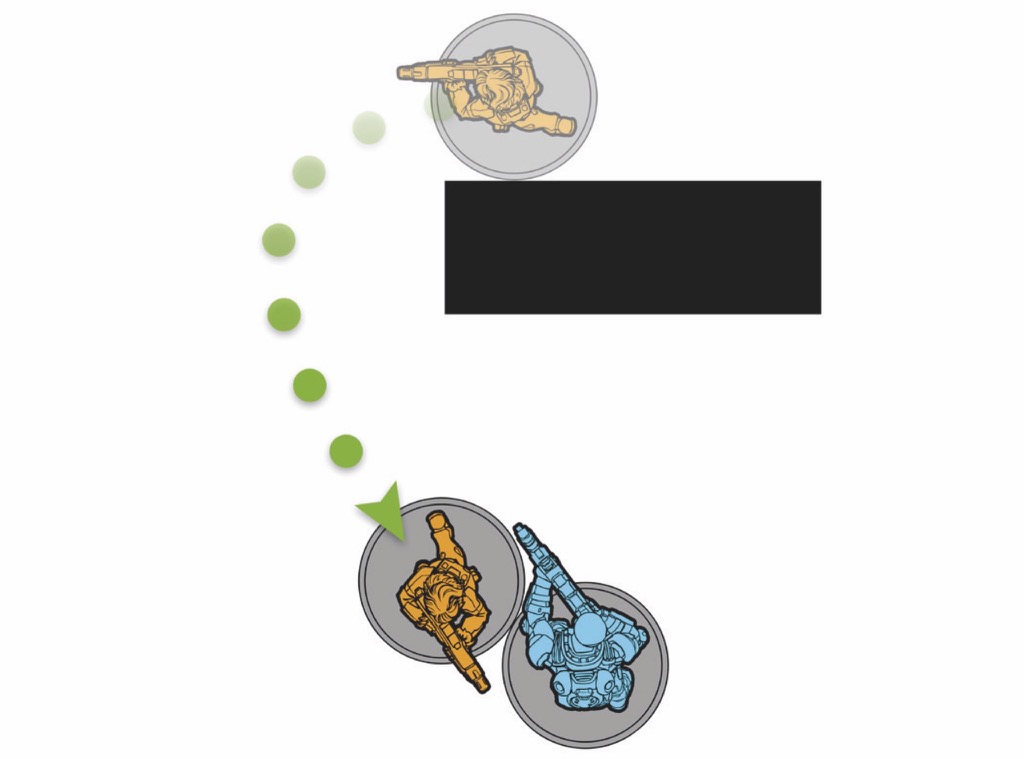 The Active Player (Orange) declares CC Attack as the second Short Skill of the Order. 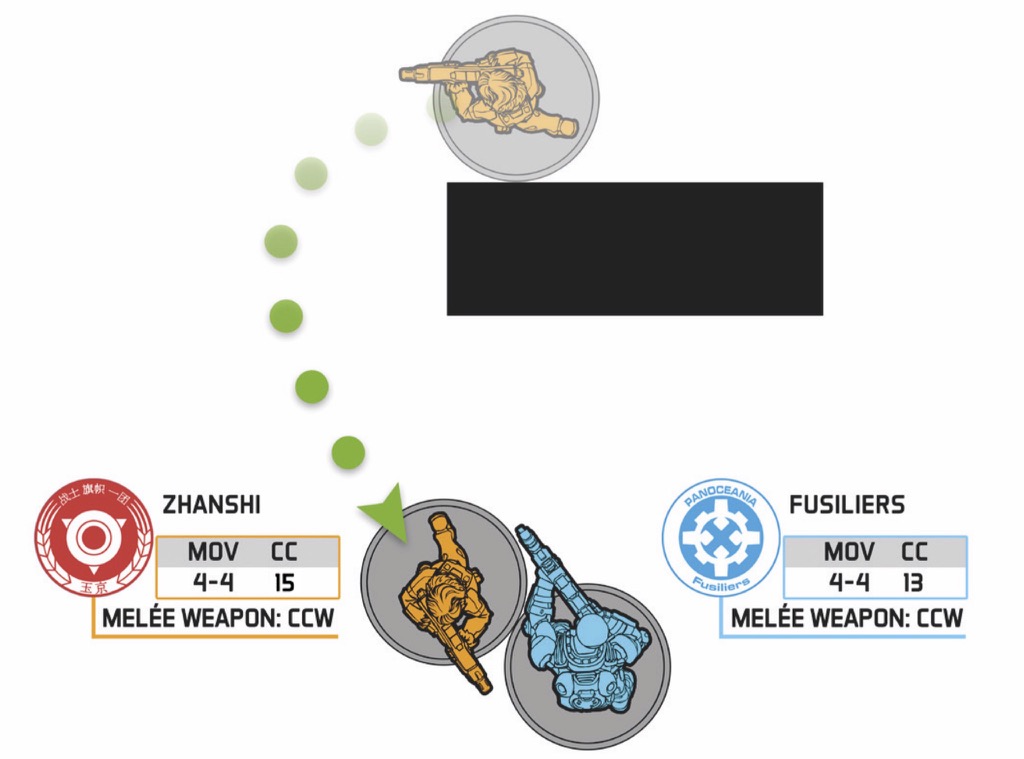 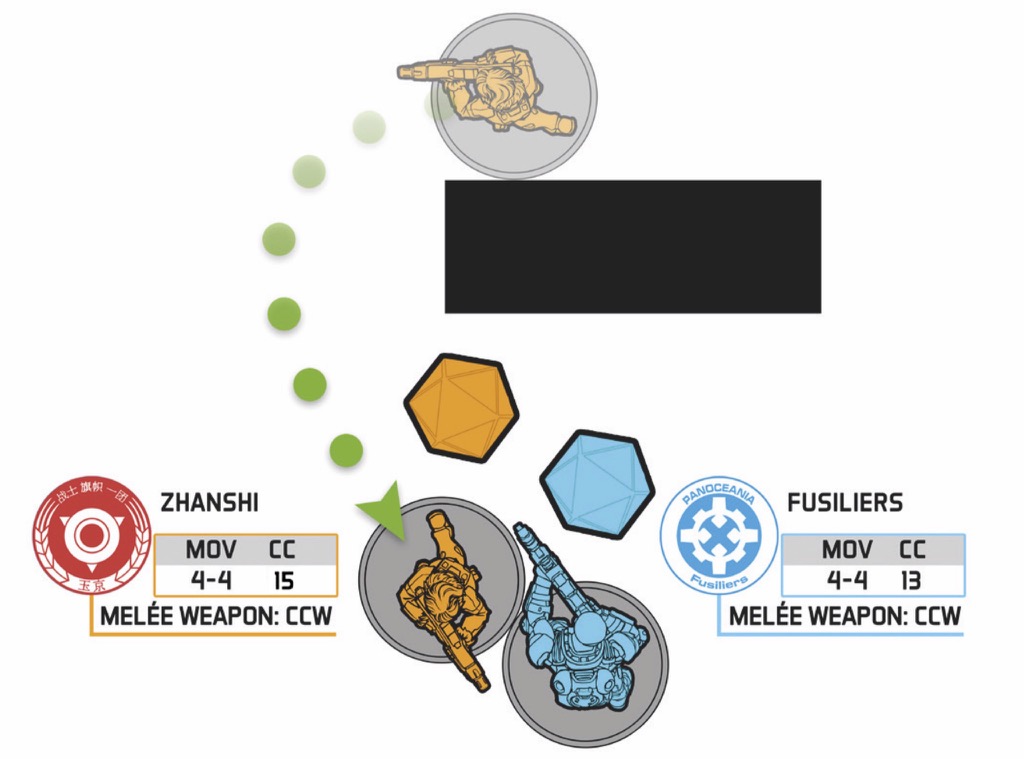 Before performing the CC Attack Roll (or Rolls), the player must check every MOD they must apply. The MODs are:

This rule is applied when more than 2 Troopers are engaged in Close Combat and any of them is activated.

During the Active Turn:

During the Reactive Turn:

When in Close Combat it is only possible to declare CC Attack, Dodge, Idle or Reset.

The maximum number of Models that may be in Silhouette contact with a Model on a 25 mm base is 4.

The maximum number of Models that may be in Silhouette contact with a Model on a 40 mm or larger base is 6.

In the image we have a Fusilier (Blue) and a Doctor Zhanshi YĪSHĒNG with his Servant Peripheral YÁOZĂO (Orange).

The Active Player (Orange) consumes an Order and declares Move. 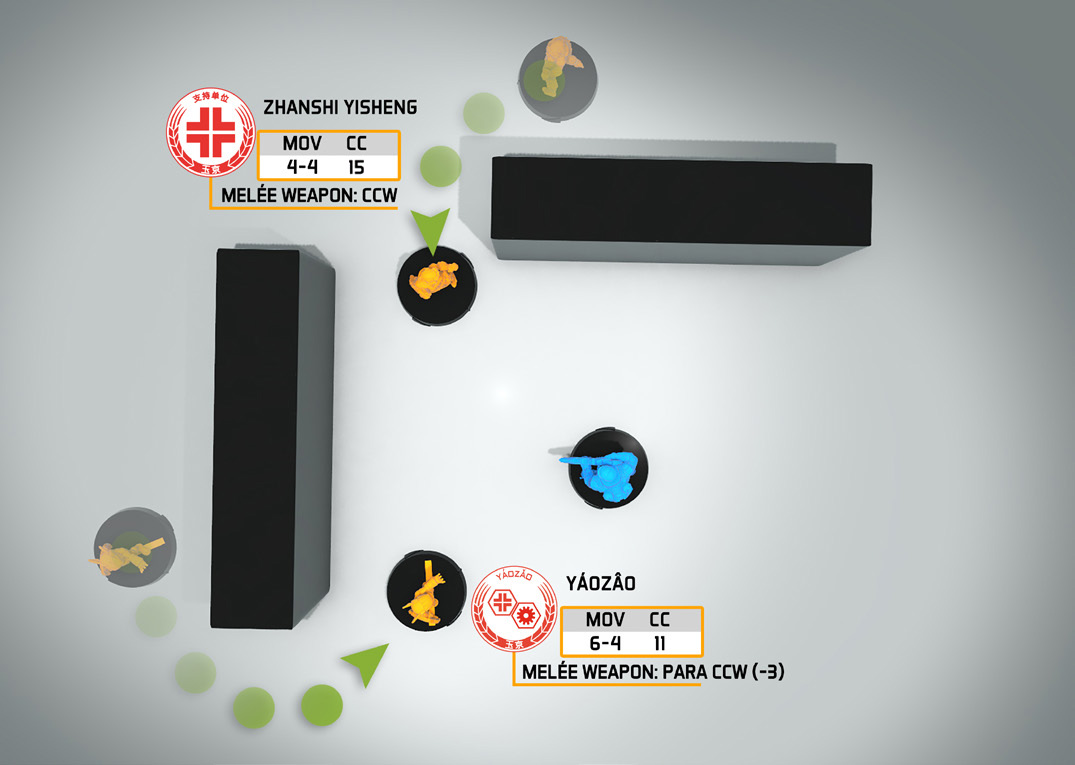 The Reactive Player (Blue) declares BS Attack against the Doctor as ARO. 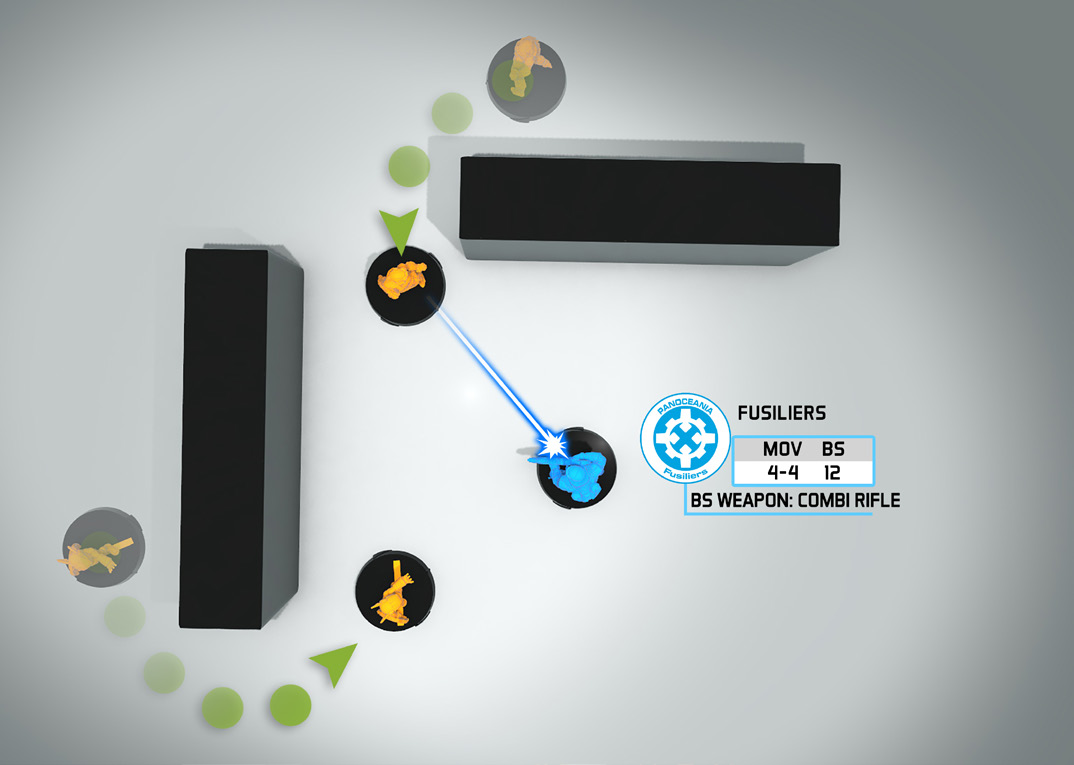 The Active Trooper declares CC Attack. The player chooses the Doctor to perform said CC Attack. The Doctor obtains a +1B MOD for having his Peripheral (Servant) in contact with his target. 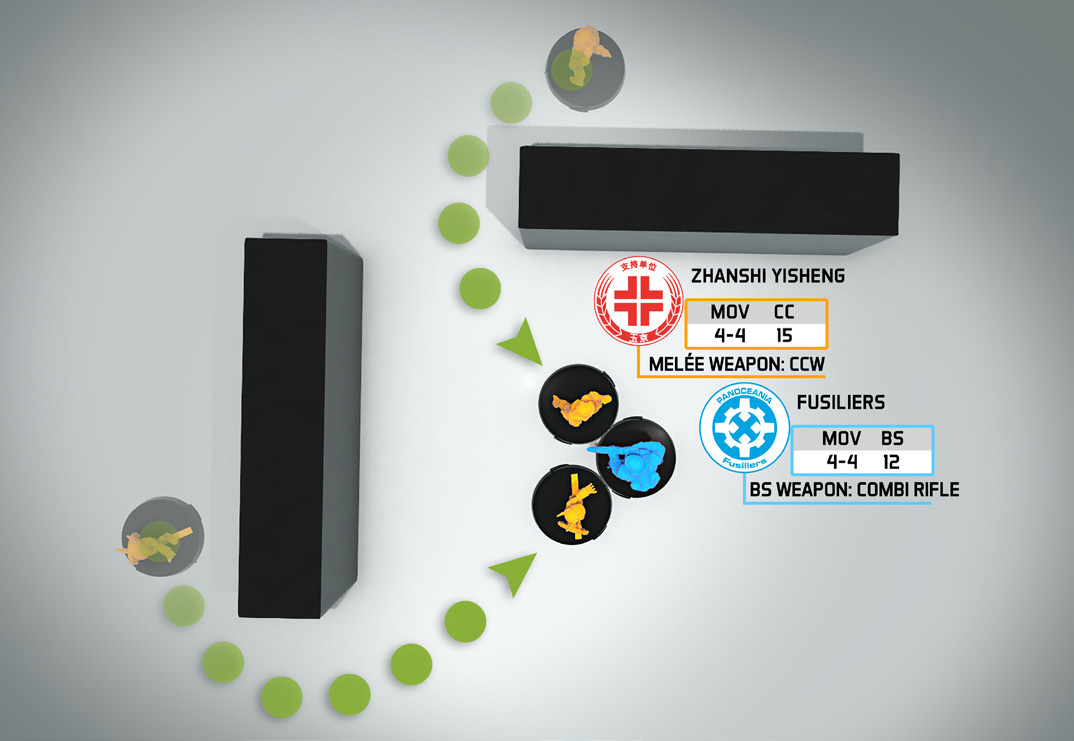 Measurements for the BS Attack are made and the dice are rolled. Face to Face Roll: 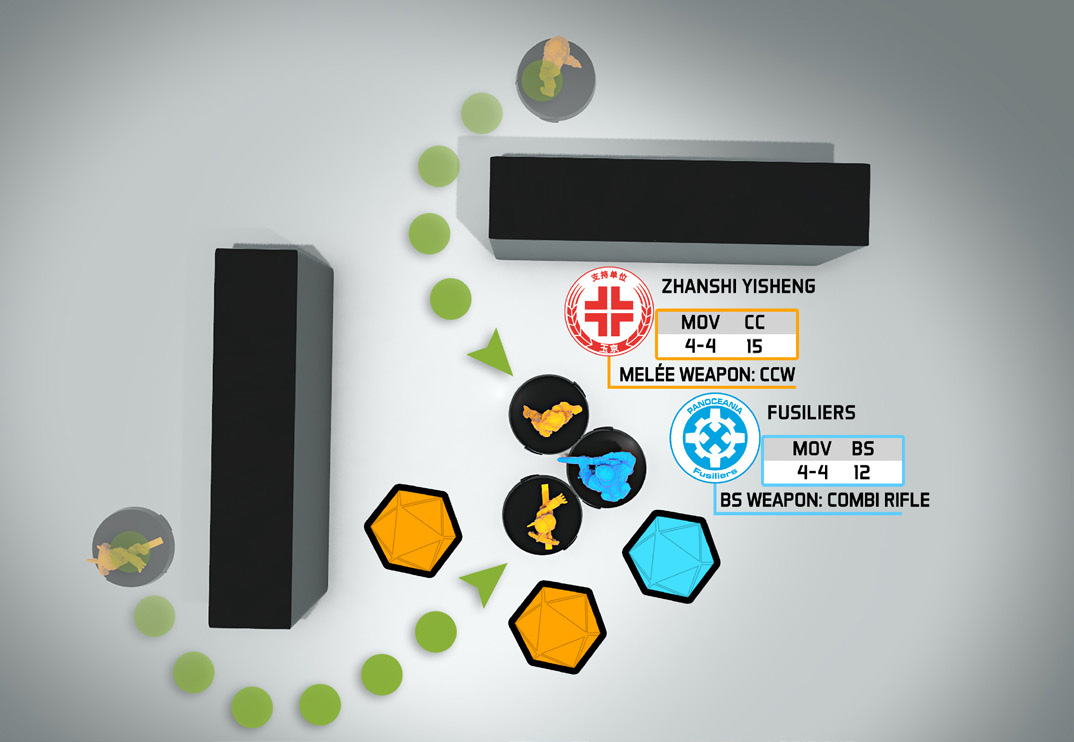 In the Blue player’s Active Turn, a Move + CC Attack Order is added to the previous example’s melee:

The Active Player (Blue) consumes an Order and declares Move until coming into Silhouette contact with the Peripheral (Servant). 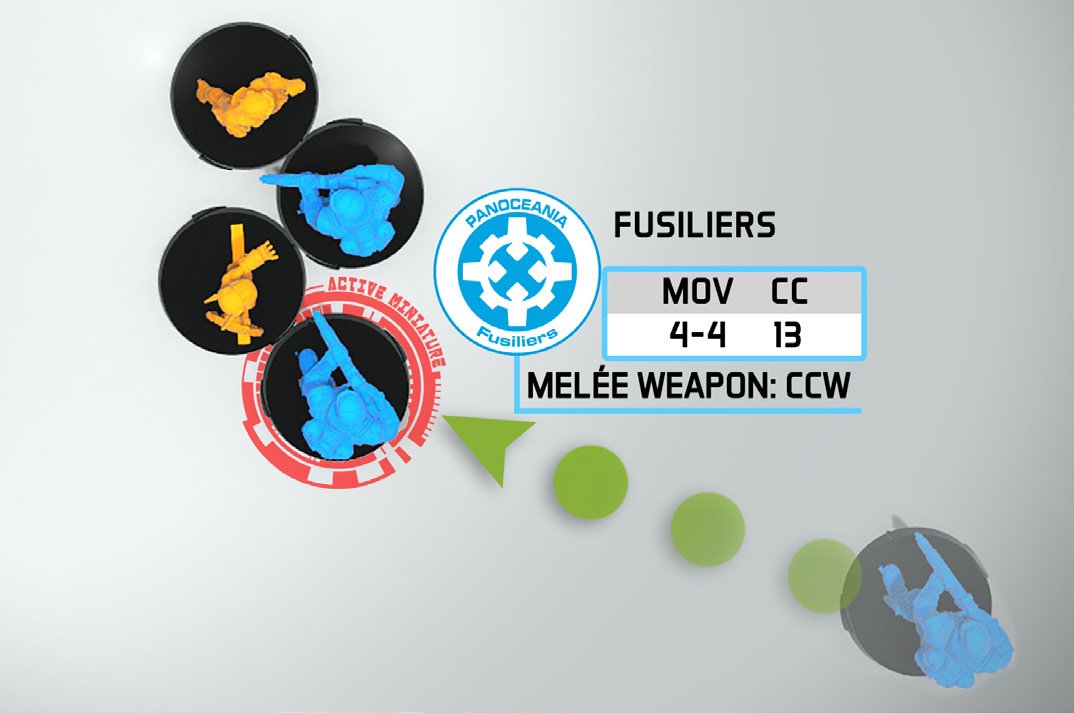 Step 2 Since the Troopers involved in a Close Combat do not have LoF outside Close Combat, they cannot declare BS Attack. Therefore, the Reactive Player (Orange) can only declare CC Attack, Reset, Idle or Dodge with their Peripheral (Servant).

They decide to declare CC Attack as ARO with their Peripheral (Servant). 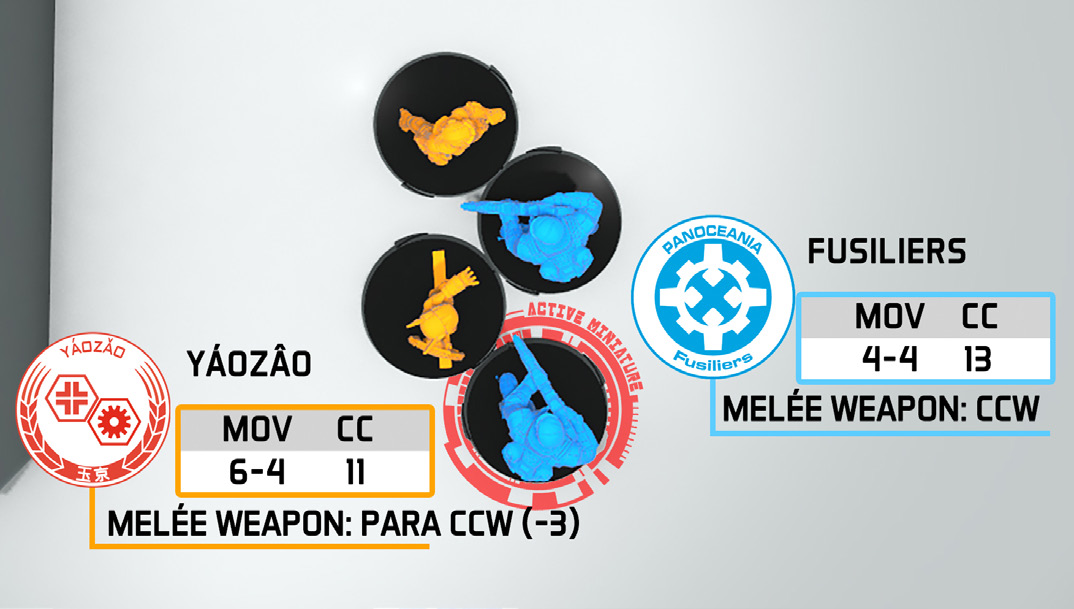 As the second half of the Order, the Active Player declares CC Attack.

The Fusilier obtains a +1B MOD thanks to his partner being in CC with the Peripheral (Servant).

The Peripheral does not obtain the +1B MOD because its Controller is not in CC with the Active Trooper. 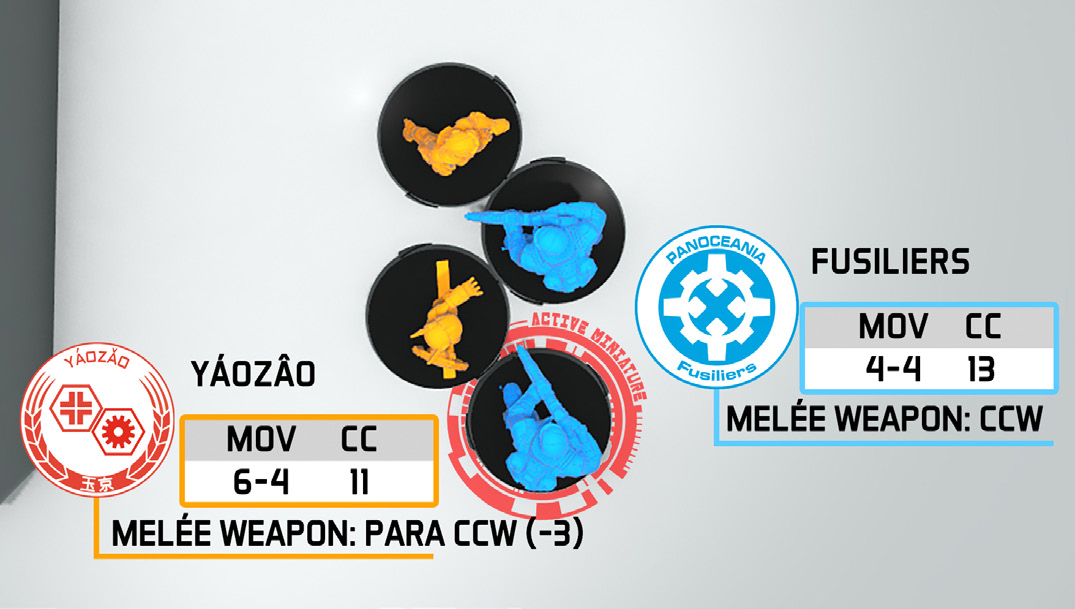 The corresponding Rolls are performed. Face to Face Roll: 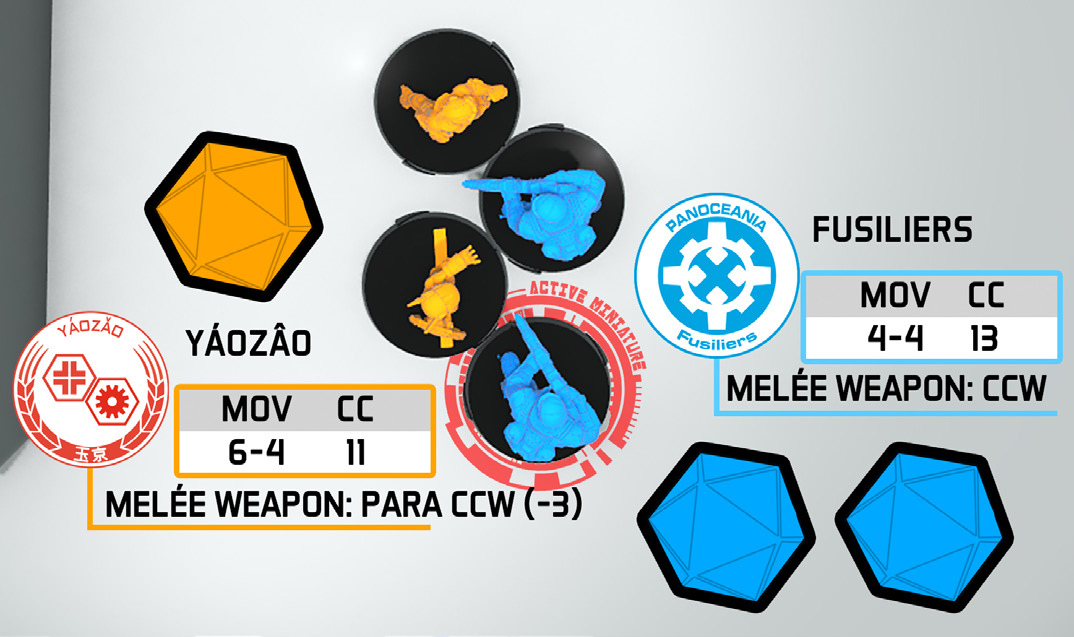