The basic rules are one of the pillars of the general game mechanics; these are the rules all players must know in order to play. This chapter creates the game engine that establishes Infinity as an excellent modern tactical combat simulator.

Basic Rules establish the characteristics of Infinity Troopers and the way in which they behave inside the game environment. They also determine how to create combat forces and the rules needed to begin playing, as well as the game structure. The fundamental section of this chapter is the explanation of the Orders system, the central core of the game model that players will be using constantly. It is the system that enables players to participate during the entire game, without having to stop playing at any point.

To play Infinity you will need the following things:

This rules set uses precise terminology throughout to refer to key elements of the game that players have at their disposal.

You can find all Infinity Terminology and Alignment in the Glossary.

Information in an Infinity game can be either Open or Private. [read more...]

Labels and Traits in Infinity

The function of Labels and Traits is to quickly indicate details and to group common features.

Labels indicate a series of defining aspects of a Skill, Special Skill or piece of Equipment for quick reference. You can find all Infinity Labels in the Glossary.

Most weapons and Equipment have special features, called Traits. Traits usually relate to Common Skills or Special Skills, or to specific effects that make these items special. Some of them are self-explanatory. You can find all Infinity Traits in the Glossary.

In Infinity there are several Factions that represent the different Armies of the Human Sphere and the alien forces of the Combined Army. 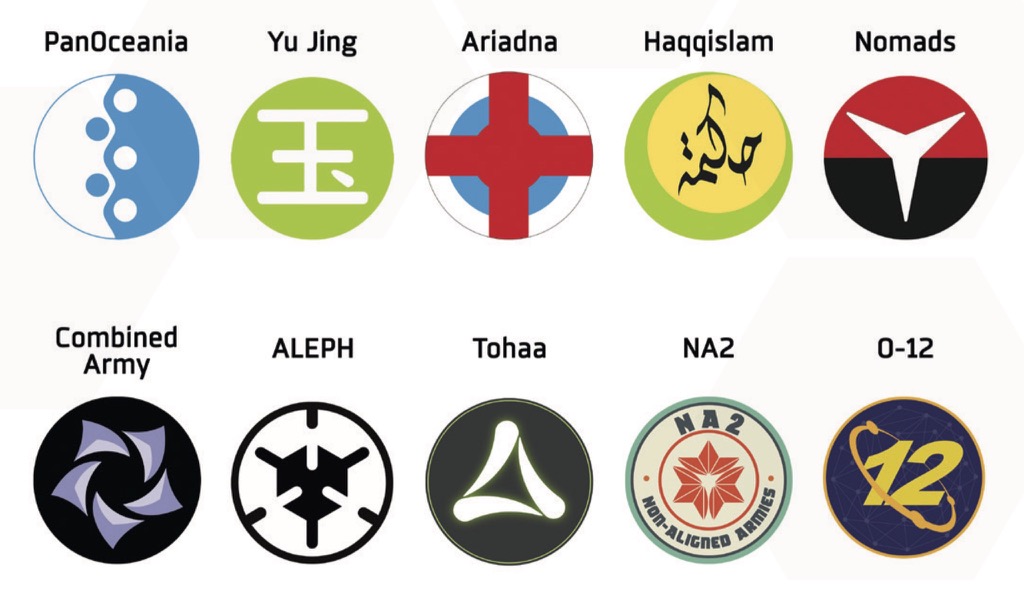 “Soldiers” in Infinity are called Troopers and are grouped into Units belonging to each Army. [read more...]

‘State’ is a game term for each of the altered conditions, beneficial or not, that a Trooper or game element might find itself in. Each state has a specific game effect, as well as individual methods of activation and cancellation. States in Infinity are cumulative, and are indicated by placing State Tokens next to an affected Trooper.

The Army List is the list of troops that make up the combat forces the player will be using during the game. [read more...]

Infinity Army is the free and official tool to create Army Lists for Infinity. This tool offers:

Infinity Army is the quickest and easiest way to create Army Lists, and it is available for free on the official Infinity website: http://www.infinitytheuniverse.com

In Infinity, the capacity of an army to maneuver and take actions is measured in Orders. An Order is a game concept, a sort of currency spent to activate a Trooper so that it can take part in the battle. The higher the number of Orders at its disposal, the more an army can do. [read more...]

Players use Orders to activate Troopers and have them perform actions in the form of Skills (Move, Jump, CC Attack…). [read more...]

Infinity games are divided into Game Rounds, or Rounds, during which both players have the chance to take an active role. This means each Round is divided into two Player Turns, or Turns, one for each player. [read more...]

Despite their training and their constant connection with Mission Control, losing a team leader to enemy fire or system failure can wreak havoc on the discipline of soldiers, creating a moment of confusion in which everyone is left to their own devices, without a coordinated tactical approach. [read more...]

Silhouette Templates, Line of Fire And Zone Of Control

In game terms, all Troopers occupy an unvarying volume on the table. This volume is cylinder-shaped, with its width determined by the base size and its height by the type of Trooper. [read more...]

In Infinity, Troopers have a Line of Fire (LoF) angle of 180º, that is, they can see with the front half of their base, as shown on the base of the miniatures. [read more...]

Troopers have an awareness of their surroundings. Zone of Control (ZoC) is defined as an imaginary cylinder with a radius of 8 inches from the outer edge of the Trooper's Silhouette, extending 8 inches up from the top of the Silhouette and 8 inches down from the bottom of the Silhouette. [read more...]

Interaction Between Zones, Bases and Silhouettes

This ruleset frequently uses terms that define the interaction between Troopers and other game elements. [read more...]

Coherency is the game mechanic which allows management of several linked troopers acting together and simultaneously in the same Order while applying a rule, Special Skill, piece of Equipment, Game State... that requires those troopers to stay in close proximity. [read more...]

Distances in the game table are measured in inches, using a tape measure or ruler. [read more...]

Occasionally, during a game, it is necessary to replace a Game Element like a Trooper, or a piece of Equipment, with another Model or Marker due to a Special Skill, piece of Equipment, game condition, or scenario condition. For simplicity, these definitions always refer to the term Trooper. [read more...]

Infinity uses 20-sided dice (commonly known as d20) to determine whether specific actions are successful. For example, players roll dice to find out whether their Troopers succeed in hitting their target in ranged combat, hacking into enemy systems, discovering a hidden enemy, etc. [read more...]