These weapons place a Template at the point of impact.

To Dodge an Attack with several Impact Templates in the same Order, every Face to Face Roll must be performed separately against the PH Roll (or PH-3 Roll, according to the case) of the target Trooper, allowing the Trooper to dodge all Templates with a single Roll. 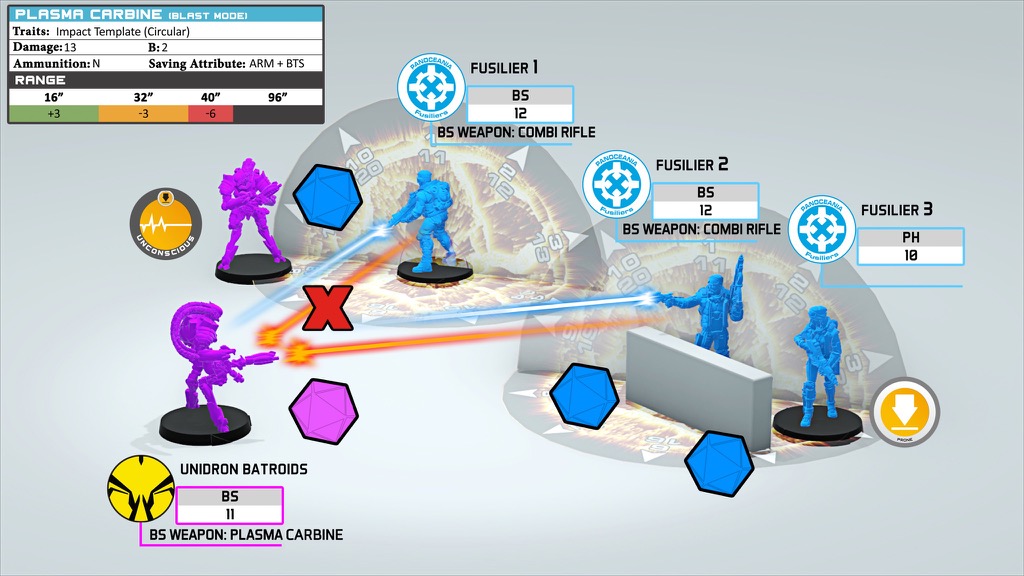 The Unidron declares BS Attack with his Plasma Carbine in Blast Mode, targeting Fusiliers 1 and 2, hoping that the template would also affect Fusilier 3.

After declaring the BS Attack, the Circular Templates are centered on the Fusiliers and it is indeed checked that they also affect Fusilier 3, as well as the Unconscious Unidron next to Fusilier 1.

Therefore, Fusilier 3 gains the right to ARO, since he was affected by a Template Weapon and the other Attack, declared against Fusilier 1, was cancelled because it affected an Allied Trooper.

In that moment, Fusiliers 1 and 2 declare their AROs: BS Attack. Fusilier 3 declares Dodge (PH-3 due to the lack of LoF to his attacker).

Thus, the following Rolls are performed:

One Normal Roll from Fusilier 1 against the Unidron.

Two Face to Face Rolls from the Unidron against Fusiliers 2 and 3. The result obtained by the Unidron after applying all relevant MODs will be compared separately with the BS Attack of Fusilier 2 and the Dodge of Fusilier 3.